Master’s Thesis “The Canadian Department of Peace: History and Potential” 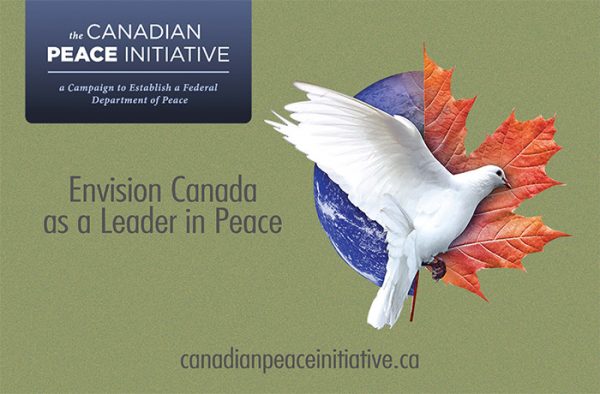 For the Master’s Program in Peace and Conflict Studies at University of Manitoba, Victor Kliewer wrote a thesis titled The Canadian Department of Peace: History and Potential.

ABSTRACT
This thesis examines the possibility of establishing a Department of Peace (DOP) as a Department of the Government of Canada. The topic has been introduced in Parliament twice—in 2009 as Bill C-447 and in 2011 as Bill C-373; neither Bill received any further action beyond the First Reading.

The introduction of the bills could only happen on the basis of significant support among Canadians. At present, in 2019, efforts to reintroduce the DOP into the Government, although somewhat muted, continue; and the concern for peace—including all of its diverse aspects, both within Canada and around the world—remains as urgent as ever.

The thesis, based on relevant literature and oral interviews, evaluates the establishment of a DOP in the context of the Canadian peace tradition as well as other global peace developments. It concludes that a DOP has great potential to move the peace agenda in Canada forward but that, in view of the priorities of the current government and the general mood in Canadian society, it is not realistic to expect a DOP to be implemented at present. The recent appointment of the Women, Peace and Security Ambassador in December 2018 represents a step in this direction, but a fully structured DOP would provide a more significant framework for the advancement of peace, defined in the preamble of Bill C-373 as “not simply the absence of active hostilities but rather a state of non-violence, harmony, and amity.”

The full thesis is available in PDF from the University of Manitoba library.