Learn about the Initiative

Given the escalation of violent conflict, nuclear threat, and lawlessness across our shared globe today, there has never been greater urgency or a better window of opportunity to promote the Canadian Peace Initiative.

We are part of a growing international movement that includes citizens from some 50 countries represented in the Global Alliance for Ministries & Infrastructures of Peace. Four governments have already established Ministers of Peace: the Solomon Islands (2005), Nepal (2007), Costa Rica (2009), and most recently the Autonomous Region of Bougainville, Papua New Guinea.

Our Initiative has chapters and contacts across Canada and is endorsed by more than 30 national organizations and eminent individuals. Supporters of the CPI include such prominent Canadians as the Honourable Lloyd Axworthy and Senators Doug Roche and Dr. Anne Pearson. The CPI is also supported by several organizations that together represent 2 million Canadians, such as the Council of Canadians, the World Federalist Movement ? Canada, and Physicians for Global Survival.

Our strategy is to use Bill C-373, An Act to Establish the Department of Peace, as a road map and build a groundswell of support among the Canadian people, to make the idea compelling to politicians. 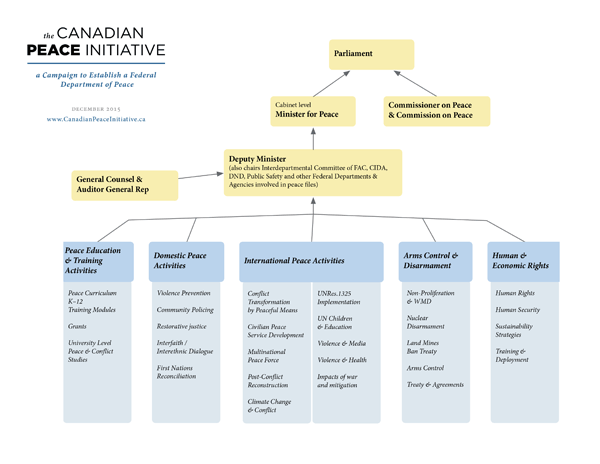 Living free from the threat of armed violence is a basic human need. It is a precondition for human development, dignity and well-being. Providing for the human security of their citizens is a core responsibility of governments.

~ The Geneva Declaration on Armed Violence and Development, 2007